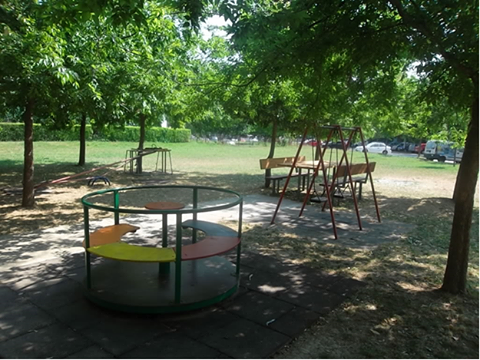 While working on the Green phone of the Green action, we are often faced with reports of unlawful treatment of citizens on which, i believe, all of us would rather not respond.
We received one such case in early July, of which we were notified by the perpetrators themselves.

The citizens of Špansko, unknowingly, violated the Decision on municipal order, went about a quite complicated and lengthy procedure of obtaining permits for performing works on the public green area and made, according to the words of the Municipal services, illegal acts, i.e. a misdemeanour’s on the public green area. Upon the report by one citizen, Municipal services very quickly came to the field and ordered the removal of illegally performed works with the deadline for the execution of a few days.

Unless the citizens remove the irregularities, the City will remove them at the expense of the perpetrators, with quite a high fine. When a person reads this short description of the whole case, he/she would think that it is, at the very least, about the illegal construction in the protected cultural or natural heritage. But before we write what is actually crime which the citizens committed, we have to emphasise that this is not a mere arbitrary will of one person, but the initiative of citizens who wanted to do something generally useful in their part of town. Namely, the residents of several buildings in Špansko, at their own expense, in the absence of benches in a small park and playground in front of the building, without the approval of the competent authority placed two benches and one table, and for safety reasons attached them to the ground. In order to remove them, and the municipal services monitoring officer ordered the immediate removal, they would have to hatch them and destroy them.

Given that these are illegally performed works on the public green area, no matter that the function is of general benefit for all visitors of the park, the citizens have no legal grounds for appeal against the decision of the municipal services monitoring officer, because from a legal point of view, municipal services monitoring officer is right. But what about that other, human side of the story?

Daily visits to the park with the kids, socialising and playing from which a joint initiative to do something useful that this park lacks eventually spawned. And exactly one such case shows one of the most important but also the most difficult role of working on the Green Phone, the role of mediator. First of all, it is necessary to determine the severity and the consequences of the violation, because even though we, as the citizens themselves now, are aware that the procedure and the Decision on municipal order was violated, we are likewise aware of the consequences of the misdemeanour. In this particular case, the violation of regulations does not result in harm to the environment and nature, but on the contrary - the common good for all visitors of the park.

Precisely with this argument, namely the absence of harmful, but generally beneficial consequence of one misdemeanour, we contacted the competent Department for greenery, where we were advised that the citizens should submit an application for the “legalisation" of benches and a table placed on the public green area, on the basis of which they will, with the recommendation of the Council of Neighbourhoods and after checking the security of placed benches, hopefully render a positive Decision. We recommend to citizens, after submitting an application for “legalisation”, to have a conversation with the competent Municipal services, familiarise them with the fact that the process of “legalisation” has begun and within that meaning ask for the delay of removal of benches until the Decision of the competent body is reached. Whether the competent bodies show good will, is yet to be seen.