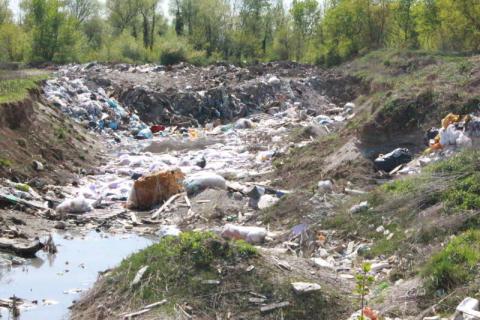 One of the biggest open dumps of construction and hazardous waste in Croatia for more than a decade is located in the forest of Ježdovec to the west of Zagreb, where the waste has been illegally buried in the ground for years after illegal deforestation and exploitation of sand and gravel.

The Green Phone points to this problem for the past 10 years, having repeatedly filed complaints with the Environmental Inspection, but the problem was not solved. We reported the case to the Forestry Inspection, Building Inspection, Water Rights Inspection Service, and municipal services, and we reported the registration plates of the truck to the police, from which the waste was unloaded on this location. Neither the Environmental Inspection nor the other institutions have done anything to solve the problem but mostly transferred the responsibility.

The response of the Environmental Inspection 4 years ago was that the inspection “has not found dumped waste”, although there are a few hundred cubic metres of waste in this location. The accumulated waste includes dangerous materials such as asbestos or the packaging of various chemicals and oils for which reason the local residents are concerned about their health. Hazardous content from the waste goes to the deeper layers of the earth due to rainwater, a large part of the village still has no water supply system, but uses wells which may be contaminated in this way.

It should be noted the Ježdovec is Zagreb’s reserve waterwell and is located on the aquifer area upstream from the Mala Mlaka waterwell. In June this year we requested again from MENP to urgently resolve the problem and launch punitive measures against polluters, but the inspection and Minister turned a deaf ear, which clearly says that they do not intend to protect the environment and nature. Therefore, Green Action put several barrels with tags “infectious waste” in front of MENP and photos of the open dump in Ježdovec, with prominent request for resignation of the Minister Zmajlović. Other than ignoring the problem of open dumps, of which there are over 2,000 in Croatia,

Minister Zmajlović maintains the state of chaos in the waste management system in many other cases. Due to the casual and irresponsible work of Minister Zmajlović, the chances to satisfy the goal prescribed by law in the next 18 months regarding the reduction of biodegradable waste by 50% compared to 1997, is minimal. And if we do not satisfy this goal, we are threatened by penalties expressed in the millions. In addition, with persistent encouragement of the projects for the construction of over capacitated, expensive, and environmentally dangerous regional centres for waste management and encouraging the burning of waste in incinerators and cement plants throughout Croatia, the Minister is harming the environment and the Croatian economy.

In addition, the Minister adopts a whole series of ordinances that, in practice, will further downgrade the waste management system. For example, the Regulation on Municipal Waste provides for inaccessible and unprofitable waste separation, and the Ordinance on Packaging and Packaging Waste eliminates the refundable charge for part of PET packaging, even though it proved to be an environmentally and socially extremely efficient measure. With these methods the Minister hinders the development of the system in Croatia for years and favours certain interests, and if something does not change soon, the citizens will have to pay the consequences.