Barrels, barrels all around us... 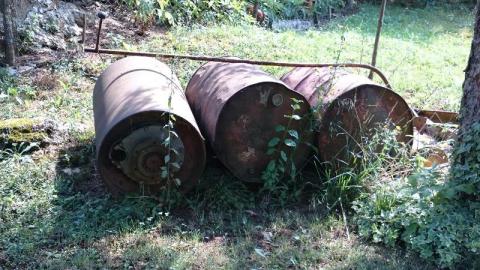 During the summer, Eko Pan received a call to the Green Phone from the city Tounj (near Ogulin) regarding improper disposal of barrels with unknown content on a private parcel.

Given that over the past few months illegal depositing of nearly 80 barrels of hazardous waste has been recorded in Karlovačka County, citizens have become very sensitive to these illicit phenomena.

By going on the field and photographing the situation, we convinced ourselves that an irresponsible owner of the private parcel deposited barrels with unknown content along the edge of his property. After a field visit and photographing, we sent a report to the environmental inspection and demanded urgent solving of the problem.

In the inspection’s response, and pursuant to the obligation laid down in Article 28 of the Act on Sustainable Waste Management (OG 94/13), Municipality of Tounj was ordered to solve that particular problem. In a relatively short period of time we received an answer from the Municipality of Tounj in which they notified us that they acted according to the order of the inspection and by making a field visit, they determined that the barrels are no longer present on the reported location.

As a confirmation, they sent us photos. Let’s assume that the owner of the parcel removed the barrels, but the question remains, if it is a hazardous waste, whether it was disposed of in a manner prescribed by law. To be continued.