Stream in Sovinjak filled up with asphalt 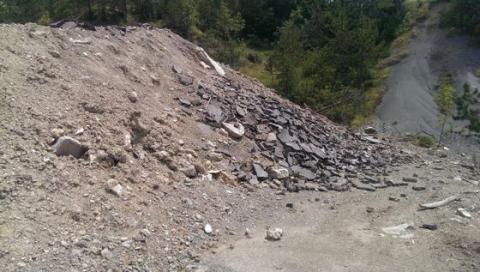 Through the Green Phone citizens reported illegal disposal of harmful materials into the stream in the village of Sovinjak in Buzet.

Namely, this June a part of the county road of approximately 1000 m2 in the village of Sovinjak was repaired.
The County Roads Administration of Istria County, which concluded a contract with Istarske ceste d.o.o. for the performance of works, is in charge of repairing the road, while the locals are saying that a local company from Buzet was also contracted for the performance of works.

The contractors drove the entire old layer of asphalt and deposited it into the nearby stream at the location of Sv. Anton, 1 km from the village of Sovinjak. The old asphalt was deposited illegally at a location which has a sign indicating a ban of waste disposal. The water pouring into the stream during rain passes next to arable land, fields, and gardens, therefore it is not necessary to emphasise the damage of such negligence and carelessness.

Such an act violates the Sustainable Waste Management Act, as well as the Water Act and Nature Protection Act. We have reported this case to the town of Buzet, which has jurisdiction in resolving this case, and to the Environmental Inspection Service. After the reports of Green Istria and numerous publications in the media, citizens informed us that the stream is being rehabilitated!

However, the story does not end there – encouraged by the success, the citizens also requested inspection of the disputed, newly constructed road for a number of irregularities!

Finally, the question remains – how is it possible that such oversights happen when public companies perform public works?