Waste remains a priority issue in the environment! 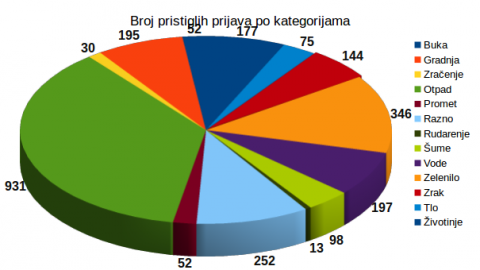 From the very beginning of the Green Phone, of all the problems that they notice in the environment citizens most commonly report problems which are directly or indirectly related to waste.

In urban areas, the reports are mainly related to poor infrastructure for waste separation (insufficient containers, insufficient separation containers, etc.) and the possibility of active participation of citizens in the process of recycling (inquiries about the proper disposal of certain types of waste, queries related to the work of recycling yards, etc.).
Activists of the Green Action’s Green Phone, which also covers the area of the city of Zagreb, believe that such a systematic neglect of separation and recycling resulted in the disposal of more than 90% of municipal waste in the Jakuševec.
On the outskirts of cities and in rural areas reports mainly relate to locations of illegal waste dumps. Within the category greenery 346 reports have been received, which is 13.51% of the total number of reports. Citizens are disturbed by non-transparent management of public green areas, the destruction of green areas, ragweed in private areas during the summer months.

A great number of problems have also been reported in the category water, namely 197 reports which is 7.69% of the total number of reports. Public sewerage system for domestic waste water in small settlements across Croatia is inexistent. The problem arises when individuals illegally discharge waste water and sewage water directly into the environment, causing a variety of contaminations. In several counties, Greens Phone activists received reports related to operations on rivers – the construction of small hydro power plants in violation of the regulations governing the area of environmental protection.

More than 60% of citizens’ reports were successfully resolved.

The number of the Green Phone is +385 72 123456. Green Phone is a service where citizens of Croatia can report various environmental issues and make suggestions, and the contact centre agents, activists from civil society organisations, forward the information to the competent institutions.