Six “Small Actions” – which turned out not to be so small – were conducted on the basis of cooperation between the civil sector, citizens and competent environmental production services 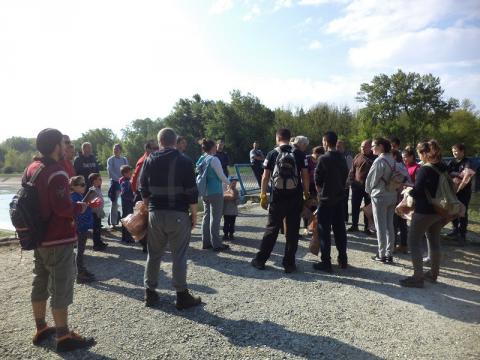 Six “Small actions” showed that cross-sectoral cooperation is possible and necessary. “Small actions” include activities conducted within the framework of the project "Partnership for the Environment", funded by the EU and the Office for Cooperation with NGOs of the Croatian Government.

The aim of these actions was to identify and resolve local environmental problems. We have determined the problems and solutions through a dialogue with the competent institutions for environmental protection, each of the partner associations in the project for its Green Phone area.

The Green Phones and local authorities determined that the biggest problem in Karlovac, Knin, Varaždin and Opatija is the improper disposal of waste in the environment and illegal waste disposal sites.
Eco Pan indicated this problem with the action of cleaning the riverbed and banks of the river Kupa in Karlovac , and they additionally educate citizens about the proper disposal of waste by printing and distributing leaflets "What are you doing with your garbage?"

Additionally, they educate citizens about the proper disposal of waste by printing and distributing the leaflets "What are you doing with your garbage?".

In Split, the need for raising citizens' awareness about the necessity and usefulness of separate waste collection has been determined. The Sunce Association has organised a one-day action during which citizens were given sets of linen bags to separate plastic and paper, as well as useful references to dates and the method of waste disposal and collection.

In Čakovec, there are no waste disposal issues. The current problem there is ragweed growing on abandoned plots. The ZEO Nobilis Association conducted a one-day public action of plucking and mowing ragweed in the City of Čakovec and also distributed informative flyers.