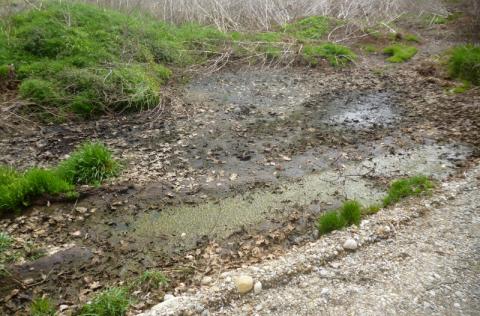 A citizen called the Green Phone of Eco Pan and asked for help in solving a problem related to an open channel for wastewater.
It is an abandoned channel, covered with grass and weeds, from which wastewater does not drain but is retained and floods the surrounding land.

The channel is located in the neighbouring land parcel, right next to the boundary line.
The person who reported the incident states that he previously contacted the Department of Utility Management of the City of Karlovac, from where he was sent to Hrvatske vode, claiming that the channel is owned by Hrvatske vode so it is their duty to maintain it. Hrvatske vode deny that they are obliged to maintain the disputed channel, so the citizen then contacted Eco Pan. He also stated that he was willing to personally repair the channel, but had been told that he should not do that because it is not on his property.

The report was submitted to the Administrative Department for Utility Management and to the Administrative Department for the Affairs of the Mayor, to which the Utility Service belongs, with the request to restore the channel to a state of functional capacity on the basis of Article 2 of the Utility Management Act, which states that it is the obligation of the local self-government to ensure the continuity and proper performing of utility activities, and to maintain utility objects and equipment in a state of functional capacity.

The response received from the City states that "the competence of the Sanitary Inspection is sanctioning companies and individuals who improperly discharge sanitary waters."
Considering that we received an answer that referred to an entirely different type of problem, we sent the report to the City, which included not only the above-mentioned provisions of Article 2 of the Utility Management Act, but also provisions of the Water Act, from which it is clear that the maintenance of wastewater drainage channels is a duty of the public supplier of water services (in this case, the city company “Water and Sewage”).

After that, we received a call from the City, this time stating that the channel is the private property of the person who owns the land and that it is his duty to maintain it. They also instructed the citizen who reported this to address the Utility Service of the City of Karlovac in order to solve the problem.