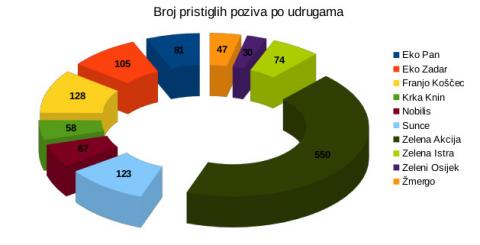 072 123 456 is the number of the Green Phone, the service through which citizens across Croatia can report various environmental issues and make suggestions, while activists from civil society organisations forward the information to the competent institutions.

In the period from 1 January 2016 to 30 June 2016, citizens contacted the Green Phones in Croatia 1263 times. The largest number of reports is in the Waste category. In 2014, a total of 457 reports were received in this category, which is more than 36% of the total number.

Chart 2, Received reports by categories in 2016. Citizens are mostly worried about inappropriate disposal and waste management, or illegal waste disposal sites. A positive change in the received reports is the increased number of inquiries about the possibilities of the separate disposal of certain types of waste.

A total of 177 (14.01%) of the complaints were received in the Green category. In addition to the frequent citizen reports from urban areas concerning the maintenance of public green areas, the number of reports about plots growing ragweed also increased. This has been particularly contributed to by the activities of local authorities through which citizens were invited to report the locations of such plots.

Although the aim of the Green Phones is to encourage citizens to participate actively and independently in solving environmental problems, the fact is that the citizens’ reports were for the most part either forwarded by Green Phones activists to the competent institutions or were handled independently. In this period, as much as 67.27% of reports were anonymous, which suggests that a fear of public appearance is present among the citizens.

«The content of this article is the sole responsibility of Pan, Association for the Environment and Nature protection, and cannot in any way be considered as reflecting the views of the European Union or the Croatian Government Office for Cooperation with NGOs.»