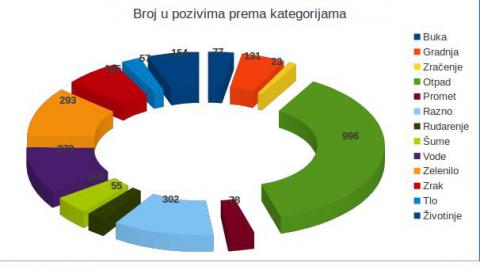 2707 citizens’ reports were received at the Green phones of Croatia in the period from 1st of January to 31st of December 2015.

The analysis of calls was prepared by members of the Green phone network in the framework of the project "Partnership for the environment" funded by the European Union and co-financed by the Office for Associations of the Croatian Government.

Green phones receive citizens’ reports on environmental issues from all over Croatia at the unique number of 072 123 456 for Croatia.

Still, the greatest number of calls from the total number refers to the category of waste, 37% (996) reports, thus continuing the trend of previous years. But unlike previous years, when most of the reports under this category concerned the improper disposal and disposal of waste and illegal landfills, the number of inquiries about the possibilities of separate collection of certain types of waste as well as queries about the possibilities of increasing the number of containers and trash bins increased in this period and ultimately, citizens are interested where the separately collected waste ends up.

We assume that the reason for this trend is an increased citizens’ awareness of the need for appropriate disposal of waste and its separation of the different types.

Among other reports’ categories are the category of greenery (293 reports) and water (270 reports). Within the category of greenery, the most common reports are from citizens in urban areas, which relate to the maintenance of public green areas, specifically felling of trees in city parks, walkways and so on. Very often it is a regular maintenance, but since citizens are not familiar with the city enterprises’ plans of regular maintenance of public green areas, their concern is in our view justified.

We believe that the fundamental failure of companies that take care of public green areas is their lack of work transparency and they should provide information to citizens about the plans of maintenance of public green areas. In most counties within this category, a large number of reports address parcels with ambrosia growth.

Although the Network consists of "sea" and "land" associations, the common problem reported within the water category from residents of all counties is the illegal emptying of septic tanks and discharge of raw sewage. Also, citizens respond to unusual spots they notice in rivers, seas and lakes.

The Green phones activists handled most of the reports independently, without direct cooperation with the callers indicating two possible problems: lack of knowledge and information among the citizens and their "fear" of the consequences of the report.

The latter is supported by the fact that more than 50% of the Green phone reports are still anonymous.

The largest number of reports arrives at the Green phone of the Green Action, 1115 applications even.